To complete some basic tasks in Revit® with a greater speed there is no way to memorize the commands. I share the ones I use most and my favorites.

LUSAV (LUMION SAVE) = Export and save Revit to Lumion. / Exporta y guarda de Revit a Lumion.

WA (WALLS) = Creates a non-bearing wall or a structural wall in the building model. / Crea muros.

— In this web (AUTODESK OFFICIAL) are all the commands that come by default in REVIT. If you want to customize the commands you have to follow the following steps …

The selection of skyscraper in this note attests a variation is found all around us. In this select we pick out 3 towers in 3 different countries: Canada, USA and México.

Aside from these six towers, there is a pavilion at the base of the TD Bank Tower that houses the TD Canada Trust Main Branch

The building was featured in the 2010 film Tron: Legacy as the headquarters of the fictional company ENCOM International.

The pyramidal form lowers the building’s center of gravity and provides the tower with structural stability in geolically active San Francisco.

The muted facade of this skyscrapper ae covered in precast concrete panels with the quartz finish.

Rainier Tower was the second tall building that Yakamasaki designed for Downtown Seattle. The square footprints and their vertically striped cladding.

The square footprints and their vertically striped cladding, The Facade is clad in glass and aluminum, the latter in the form of alternating wide and narrow stripes.

Bruce Graham and Fazlur Kham had created one of the most distinctive and influential modern skyscrapers. The tower express rational and dramatic.

The property has GOLDEN LEED certification, friendly with the environment, saves 40% water and 25% energy.

Upon its completion in 2015 it became the second tallest building in Mexico City at 235 metres (771 ft) and 50 stories high. However by 2018 it is expected to be the fourth tallest in Mexico, after Torre KOI, Torre Reforma and Punto Chapultepec.

The tower has 30,000 m² of glass on the south facade with thermal and acoustic insulation, plus finished marble inside and granite in common areas and hallways. The architecture of the building is contemporary and international quality. It also has three electric power supplies in average voltage, and it is noteworthy that it is the only building in Latin America that feeds energy from three different points of the city.

The 64-story building contains 27 floors of office space, and 218 apartments and 18 penthouses across the upper 37 floors, ranging from 130 to 832 square metres (1,400 to 8,960 sq ft). Each apartment has access to its own storage space and 2 or 3 parking spaces. Furthermore, residents enjoy communal amenities on the 22nd floor, which include an infinity pool, a bar, a sauna, a private guest room, and more. The project was certified LEED BD+C Silver in May 2018 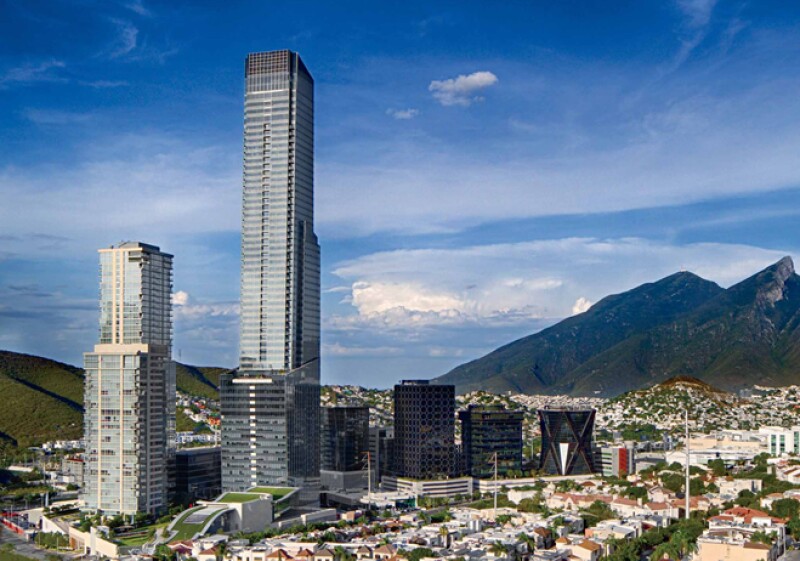 «Para mí es una gran alegría saber cuánto se ama el edificio». / “To me it is a great joy to know how much the building is loved.” Jørn Utzon

Trabajé mucho, hice más de 500 proyectos. Entre ellos, me gustan mucho el Congreso y la Catedral de Brasilia, y también el Museo de Arte Contemporáneo de Niterói. Me agrada mucho además una mezquita que hice en Argel. » / « I worked hard, I did more than 500 projects. Among them, I really like the Congress and the Cathedral of Brasilia, and the Museum of Contemporary Art in Niterói. I am very pleased I did also a mosque in Algiers.  Oscar Niemeyer.